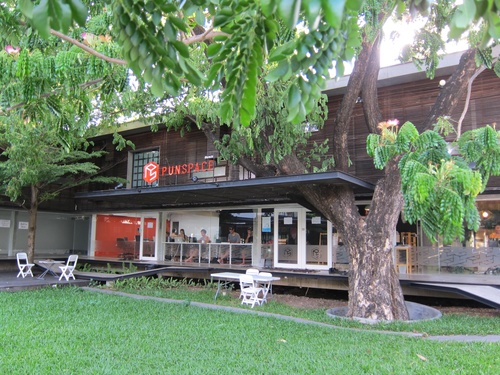 Digital Nomads took to the interwebs two days ago to “live-blog” their experiences at a Chiang Mai co-working space. Immigration officials, along with police and military personnel, raided PunSpace catching a lot of these digital nomads working on their internet businesses. The laws in Thailand are often fuzzy and while no one at PunSpace went to jail or got deported, it’s best to know what the law actually state to protect yourself.

In this article, I’ll give you a better idea about what digital nomads should be doing to stay legal while in Thailand and how many of them could make more money by running their businesses legally. I’ll use the income report from the travel blogger who first reported the immigration raid at Punspace, show how he is in violation of Thai law and how he would have less headaches and make more money by running his business legally. Of course these laws apply to all digital nomads working in Thailand, but I think it’s helpful to use real numbers.

Working on the Internet is Illegal in Thailand?

The travel blogger reporting from Punspace moved to Thailand a few years ago, living from his savings and odd jobs. About a year ago he got into the drop-shipping business and now makes around $7,000 USD per month. Since he spends most of his time in Thailand, he is subject to Thai tax law. This is the case even though he’s here on a Tourist VISA and has to leave the country every 3-to-6 months.

Taxpayers are classified into “resident” and “non-resident.” “Resident” means any person residing in Thailand for a period or periods aggregating more than 180 days in any tax (calendar) year. A resident of Thailand is liable to pay tax on income from sources in Thailand as well as on the portion of income from foreign sources that is brought into Thailand.

Since the blogger has been in the country for more than 180 days this year, he’s liable for taxes paid to the Thai government. The department that raided PunSpace yesterday was the Immigration Bureau, but since it’s the Board of Labor that would be concerned with his work status and the Revenue Department that would be concerned with his taxes, it’s unlikely he’ll ever be called out for his current work arrangement. But what if he were? Or what about the headache of VISA runs?

Let’s do some quick math. In his current situation, on a Tourist VISA, the best option would be to get a multiple entry Tourist VISA before entering Thailand. He could then stay for 60 days and go to immigration to get a 30-day extension for 90 days total. At that point he’d need to cross a border to activate his second entry. A trip to Mae Sai in Chiang Rai province would be the easiest and cheapest. He’d then repeat the same steps and after six months in Thailand, he’d need to visit a consulate outside Thailand to get a new VISA. An estimate of this trip would be about $300 for transportation and accommodation, but since that’s negligible I’ve left it off the report below. Of course if he were on a Business VISA he wouldn’t pay for any of this and wouldn’t need to waste all this time.

Now, what about the taxes? Since the blogger is an American citizen and I assume he’s operating as a sole-proprietor, he’ll be paying 15.3% to the US in self employment tax. He’s exempt from state and federal tax so long as he doesn’t stay in the US for more than 35 days per year. However, if he was to get tax residency in Thailand, he could stay in the US for 180 days per year without incurring a tax liability.

As you can see, The blogger would make $4,000 more per year by setting up a British Virgin Islands (BVI) company to invoice his products and working from the IGLU offices. He wouldn’t have to leave Thailand on VISA runs, though he could leave any time he wanted to travel.

If you’re unable to view the document above, click here to view it on Google Docs.

The details can be found on their website, iglu.in.th, but the basic idea is this: IGLU is a Board of Investment approved company that acts much like a co-working space. They arrange for a Business VISA and work permit allowing you to run your business legally from Thailand. They invoice your clients, keep 30% of the revenue for taxes, office space and back office support. They pay you the remaining 70% to a Thailand bank account.

The one caveat is, you need to have a background in some tech, design, management or marketing field. Working with IGLU isn’t like buying milk, it’s not available to everyone, but the staff are friendly and will work with you to get your documents in order.

Working In Thailand on a Tourist VISA

If you get nothing else from this article, get this: what your buddy says, what ThaiVisa forum says, what anyone says is unofficial EXCEPT for the Thai Government, and the department, bureau or section in charge of enforcing that area of law. Find the official information on their website or consult with a lawyer.

There are only a couple legal options for staying in Thailand:

The bottom two options, according to the Department of Employment, are not allowed to work while in Thailand. How can you escape all this worry? It’s very simple. Instead of ignoring the legal and financial aspects of your business, or the laws where you live, pay attention and work within the system. It’s not that bad, once you get the paperwork right.

PunSpace is a great place and Thailand Immigration has said they did nothing wrong—it was just a misunderstanding of their business model that triggered the visit. PunSpace has also given affected members a free month to compensate for the interruption.