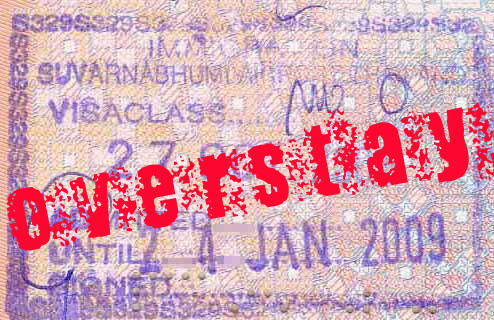 Thailand’s Immigration Bureau has announced a new set of rules regarding the enforcement of visa overstays. How will the new rules affect you? Well, hopefully they won’t affect you at all because you’re smart enough and careful enough to never overstay your visa.

The old rules were honestly quite ridiculously lenient for long-term overstays. Previously the fine for overstay was 500 baht per day, however, it maxed out at 20,000 baht. There were people who let their visas expire and allowed years to go by without addressing the problem. Finally, when they decided to leave the country all it cost them was 20,000 baht—about the equivalent of $625. After leaving, the person was able to turn around and apply for a new visa to get right back in the country again.

The new rules affect those who overstay by more than 90 days. So don’t worry if you just happened to forget the date stamped on your visa or you missed a flight because your taxi was caught in a Bangkok traffic jam, etc. If you just overstay by a few days the old 500 baht fine per day still applies to you. It will be a bit of a hassle to deal with, but it’s not something to lose sleep over.

Rather the new rules apply to people who are seriously negligent. Overstaying a visa by more than 90 days demonstrates a serious lack of planning on your part, so the penalties—which include a period in which re-entering the Kingdom is forbidden—are quite fair. The penalties differ according to the length of the overstay and also depending on whether the foreigner who is overstaying decides to leave the country willingly or whether they have somehow been found to be overstaying and arrested within the country.

For those voluntarily reporting their overstay:

For those who have been apprehended:

The original proposal for a lifetime ban on those who overstay by more than 10 years has been dropped. The only possibly troublesome part of the new policy that I can see is for those who fall into the category of being apprehended after overstaying for less than a year. It seems that it could be possible for someone who has just overstayed by a couple days to get stopped at a roadside checkpoint on their way to the airport and get slapped with a 5-year ban. Hopefully that isn’t how the rules will be implemented.

Maybe I’m naive, but I can’t imagine there are a huge number of foreigners from Western countries who have been overstaying for years on end. I would guess illegal immigrants from neighboring countries are the primary target. I suppose there may be some who are in such a tough financial situation that they’ve not bothered to get a new visa, but there are really so many ways to stay legally in the country that anyone who really wants to stay here should be able to get a visa or one sort or another.

For those over 50 who can show at least 800,000 baht in the bank, there is the retirement visa option. Those with a Thai spouse can get a non-O visa with unlimited 1-year extensions assuming they can show 400,000 baht in the bank or a minimum of 40,000 baht monthly income. For those with less money, but plenty of time on their hands, an Ed visa for studying Thai language can be obtained quite easily after signing up for classes at any number of language schools, with the cost of the lessons running around 20-25,000 baht per year.

Tourist visas are no longer a good long-term solution to stay in the country after Immigration’s recent crackdown on back-to-back tourist visas and visa waiver stamps at the borders. But a non-B visa for doing business or investment is still fairly easy to obtain—you just need a little paperwork. Those who have been freelancing up until now may be able to remain in Thailand and keep doing work for their existing clients by teaming up with a Thai company to employ them and help get a work permit. While those with money to invest can stay in the country to startup a tax-free BOI company, which even allows majority foreign ownership.

The bottom line is—just don’t overstay your visa and you’ll be fine.